Epidemiological studies initially considered the impact of total solid particles on human health, but according to the acquired knowledge about the worse effect of smaller particles, those studies turned to consider the impact of PM10. However, for the last decade PM2.5 began to be more important, once as they are smaller they can penetrate deeper in the lungs, being possible their trapping in alveoli and worse effects on human health. Therefore, more information on PM2.5 should be provided namely concerning the levels and elemental composition. Considering the relevance of traffic on the emission of particles of small sizes, this work included the detailed characterization of PM10 and PM2.5, sampled at two sites directly influenced by traffic, as well as at two reference sites, aiming a further evaluation of the influence of PM10 and PM2.5 on public health.

The specific objectives were to study the influence of traffic emission on PM10 and PM2.5 characteristics, considering concentration, size distribution and elemental composition. PM10 and PM2.5 samples were collected using low-volume samplers; the element analyses were performed by particle induced X-ray emission (PIXE). At the sites influenced by traffic emissions PM10 and PM2.5 concentrations were 7–9 and 6–7 times higher than at the background sites. The presence of 17 elements (Mg, Al, Si, P, S, Cl, K, Ca, Ti, V, Cr, Mn, Fe, Ni, Cu, Zn and Pb) was determined in both PM fractions; particle metal contents were 3–44 and 3–27 times higher for PM10 and PM2.5, respectively, than at the backgrounds sites.

The elements originated mostly from anthropogenic activities (S, K, V, Mn, Ni, Zn and Pb) were predominantly present in PM2.5, while the elements mostly originated from crust (Mg, Al, Si and Ca) predominantly occurred in PM2.5–10. The results also showed that in coastal areas sea salt spray is an important source of particles, influencing PM concentration and distributions (PM10 increased by 46%, PM2.5/PM10 decreased by 26%), as well as PM compositions (Cl in PM10 was 11 times higher). 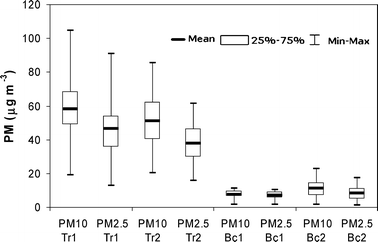