Antibody, also called immunoglobulin, a protective protein produced by the immune system in response to the presence of a foreign substance, called an antigen. Antibodies recognize and attach to antigens to remove them from the body. The body considers a wide range of substances as antigens, including disease-causing organisms and toxic materials such as insect venom.

How do antibodies work?

When a foreign substance enters the body, the immune system can recognize it as foreign because the molecules on the surface of the antigen differ from those found in the body. To eliminate the invader, the immune system uses several mechanisms, including one of the most important: the production of antibodies. Antibodies are produced by specialized white blood cells called B lymphocytes (or B cells).

When an antigen binds to the surface of B cells, it stimulates the B cells to divide and mature into a group of identical cells called a clone. Mature B cells, called plasma cells, secrete millions of antibodies into the bloodstream and lymphatic system.

As antibodies circulate, they attack and neutralize antigens identical to the one that triggered the immune response. Antibodies attack antigens by binding to them. Binding an antibody to a toxin, for example, can neutralize the venom simply by changing its chemical composition; such antibodies are called antitoxins. By attaching themselves to some invading microbes, other antibodies can immobilize those microbes or prevent them from entering the cells of the body. In other cases, the antibody-coated antigen is subjected to a chemical chain reaction with complement, which is a series of proteins found in the blood. The complement reaction can trigger the lysis (explosion) of the invading microbe or it can attract scavenger cells that kill the microbes that ingest, or engulf, the invader. Once started, antibody production continues for several days until all antigen molecules are removed. Antibodies remain in circulation for several months, providing long-lasting immunity against that particular antigen. 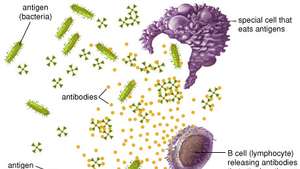 Antibodies and B cells

B cells and antibodies together provide one of the most important functions of immunity, which is to recognize an invading antigen and produce a large number of protective proteins that travel through the body to eliminate all traces of that antigen. Collectively, B cells recognize an almost unlimited number of antigens; however, individually each B cell can bind to only one type of antigen. B cells distinguish antigens through proteins, called antigen receptors, found on their surfaces. An antigen receptor is basically an antibody protein that is not secreted but is anchored to the membrane of the B cell.

All antigen receptors found on a particular B cell are identical, but the receptors located on other B cells are different. Although their general structure is similar, the variation lies in the area that interacts with the antigen: the antigen-binding or antibody-combining site. This structural variation between antigen-binding sites allows different B cells to recognize different antigens. The antigen receptor does not actually recognize the entire antigen; Instead, it binds to only a part of the antigen's surface, an area called the antigenic determinant or epitope. The binding between the receptor and the epitope occurs only if their structures are complementary. If so, the epitope and receptor fit together like two pieces of a puzzle, an event that is necessary to trigger antibody production by B cells.

Structure and classes of antibodies

Each antibody molecule is essentially identical to the antigen receptor on the B cell that produced it. The basic structure of these proteins consists of two pairs of polypeptide chains (lengths of amino acids linked by peptide bonds) that form a flexible Y. The stem of the Y consists of one end of each of two identical heavy chains, while each arm is made up of the remaining portion of a heavy chain plus a smaller protein called the light chain. The two light chains are also identical. Within particular classes of antibodies, the stem and lower arms are quite similar and are therefore called the constant region. The tips of the arms, however, are highly variable in sequence. It is these tips that bind to the antigen. Thus, each antibody has two identical antigen-binding sites, one at the end of each arm, and antigen-binding sites vary widely between antibodies.

Antibodies are grouped into five classes based on their constant region. Each class is designated by a letter attached to an abbreviation of the word immunoglobulin: IgG, IgM, IgA, IgD, and IgE. The classes of antibodies differ not only in their constant region but also in their activity. For example, IgG, the most common antibody, is present primarily in blood and tissue fluids, while IgA is found in the mucous membranes that line the respiratory and gastrointestinal tracts.

Antibodies in medicine and research 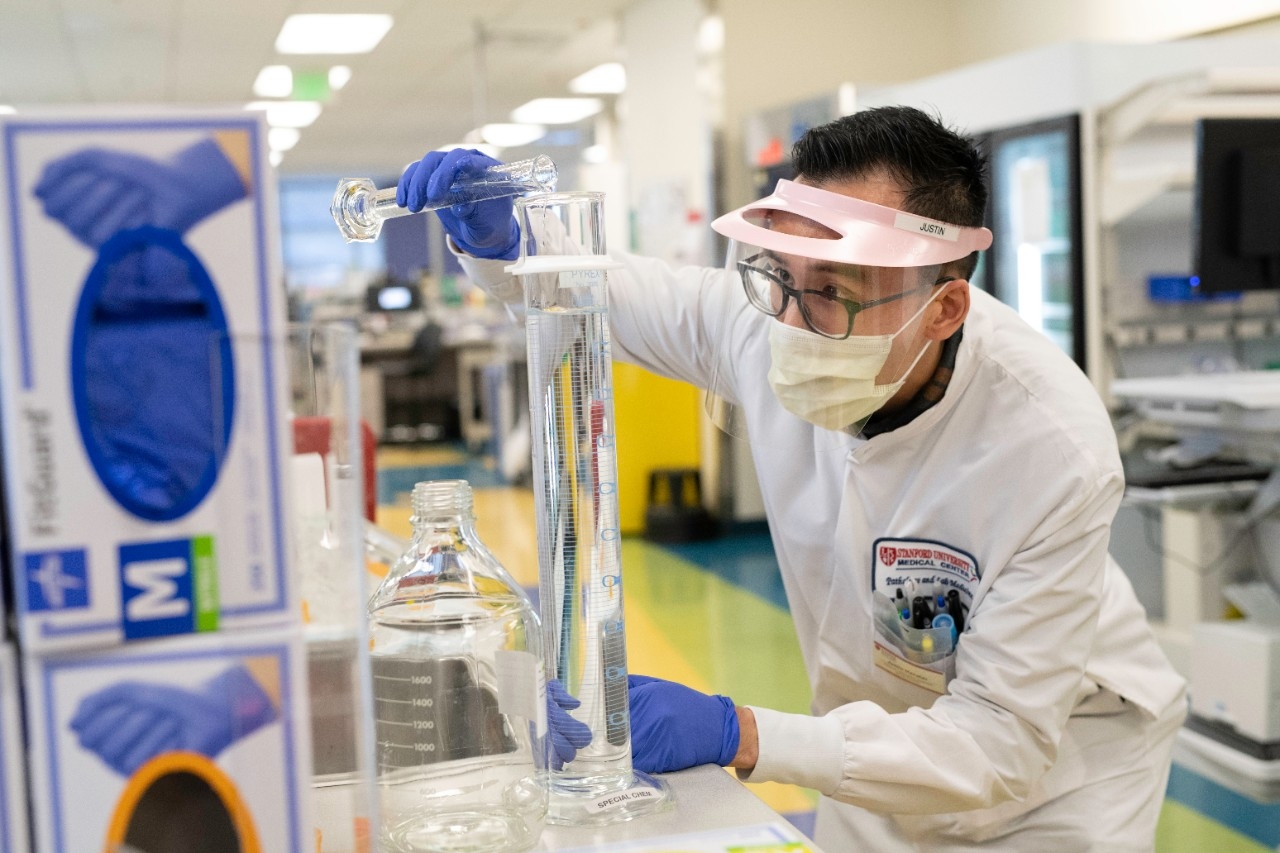 Antibodies have important applications in medicine and research. Preformed antibodies, for example, which are derived from the blood serum of previously infected people or animals, are often administered in an antiserum to another person to provide immediate passive immunization against toxins or fast-acting microbes, such as those from snake bites. . or tetanus infections. Vaccines confer active immunity against a specific harmful agent by stimulating the immune system to attack the agent. Once stimulated by a vaccine, the antibody-producing B cells remain sensitized and ready to respond to the agent should it ever enter the body.

Monoclonal antibodies, which are artificially produced by genetic engineering and related techniques, are especially valuable in research and medicine because of their ability to recognize individual antigenic sites on almost any molecule, from drugs and hormones to microbial antigens and cell receptors. The specificity of monoclonal antibodies and their availability in quantity have made it possible to design sensitive assays for a huge variety of biologically important substances and to distinguish cells from each other by identifying previously unknown marker molecules on their surfaces. For example, monoclonal antibodies that react with cancer antigens can be used to identify cancer cells in tissue samples.

Monoclonal antibodies have also been used experimentally to deliver cytotoxic drugs or radiation to cancer cells. They have shown great promise in the immunological destruction of cancer cells, particularly through strategies aimed at abolishing the inhibitory signals that prevent T cells from killing the targets they recognize. The potential efficacy of this approach has been demonstrated with ipilimumab, a monoclonal antibody approved for the treatment of advanced melanoma that binds and blocks the activity of cytotoxic lymphocyte-associated antigen 4 (CTLA4). CTLA4 is normally a potent inhibitor of T cells.

Therefore, by releasing the inhibitory signal, ipilimumab increases the immune response, enabling tumor destruction. Similar effects have been achieved with inhibitors of programmed cell death 1 (PD-1), a protein expressed on the surface of T cells that negatively regulates T cell activity and is overexpressed in many cancers. Anti-PD-1 therapies, such as nivolumab and pembrolizumab, have been shown to be beneficial in patients with melanoma and certain other types of cancer.