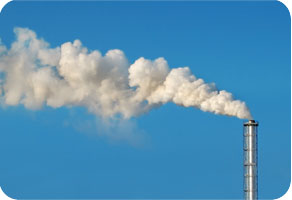 Increased public awareness about air quality, urban sprawl, and changing agricultural practices has resulted in the need for methods that address concerns about odorous emissions from municipal waste treatment facilities, landfills, concentrated animal feeding operations and industrial processes. Addressing a community's odor concerns presents many challenges, since these odors are typically a complex mixture of many chemicals. Furthermore, the compounds that are significant contributors to the odorous sources often have very low olfactory thresholds. For some time, investigators have utilized odor panels to assist them in evaluating human perceptions of odor. However, this approach does not identify the compounds present in the environment, which is required to facilitate source identification and odor emission control.

Many of the compounds generated by biogenic and industrial processes are either nitrogenous or sulfur-containing. However, some VOCs, such as carboxylic acids (also known as volatile fatty acids or organic acids), as well as higher molecular weight alcohols and aldehydes, may also contribute to the perceived odor.

Due to the chemical and physical properties of these odorous compounds, a single method often will not adequately address all of the compounds of concern. In response to this need, ALS - Columbia offers several methods that may be used independently or in combination to provide highly useful information for odor investigations.

The sampling and analytical methodologies included in the package address many of the malodorous compounds of interest to those conducting community odor investigations. Individuals conducting indoor air quality evaluations will also find the package of value due to the variety of compounds included and the low levels of detection achieved. Classes of compounds, as well as specific target compounds, were selected based on a review of the scientific literature.

The reduced sulfur target list includes 21 compounds that are associated with wastewater treatment,
petroleum refining and pulp and paper processes, as well as landfill, composting and agricultural
activities. When produced biogenically, these compounds are typically generated by anaerobic
decomposition.

Many sulfur compounds are not stable in stainless steel canisters, such as Summa canisters. Therefore, air samples for this analysis should be collected in Tedlar bags. Samples are analyzed by gas chromatography with sulfur chemiluminescence detection following ASTM D5504. Due to the unstable and reactive nature of many sulfur compounds, samples should be analyzed within 24 hours of collection.

Carboxylic acids (also known as volatile fatty acids or organic acids) are associated with agricultural activities, landfills, wastewater treatment plants and, in particular, composting operations. Compounds such as acetic, propanoic, butyric, valeric and isovaleric acids may be generated during the anaerobic decomposition of vegetable materials.

Samples are collected on a treated silica gel tube (SKC 226-55) at a flow rate of 1 L/min using a personal sampling pump. The method involves the derivitization of carboxylic acids, with subsequent analysis by gas chromatography/mass spectrometry (GC/MS). A library search may be performed to tentatively identify other carboxylic acid esters in the samples. Based on the recommended sample volume of 100 liters, it is possible to achieve a limit of quantification (2.5-5.0 μg/m3) that approaches, or is below, the odor threshold for most compounds.

We have developed a specially treated sorbent to collect the target amine compounds. The fully validated method can detect the target amines present at levels as low as 2 μg/m3 (based on a 100-liter sample volume). Sample tubes are desorbed and analyzed by gas chromatography using a nitrogen phosphorus detector.

Ammonia is an odorous contaminant of concern for a wide variety of facilities including landfills (a product of decomposition); wastewater treatment plants (in untreated sewage); composting operations (a product of both aerobic and anaerobic decomposition); and hog, dairy, and poultry farms (in animal waste).

Collection of airborne ammonia may follow the OSHA ID-188 method, which uses sulfuric acid-coated Anasorb-747 (carbon bead) tubes and a personal sampling pump for collection. This form of sample collection is much easier and safer than the traditional collection technique of sulfuric acid solution impingers. Analysis may follow the OSHA-ID 164 analysis, which utilizes an ion-specific electrode (ISE) to detect ammonia.

Aldehydes are a class of odorous compounds found in building materials and are often an indoor air quality concern.  Buildings pursuing Leadership in Energy and Environmental Design (LEED) certification may achieve one point for conducting baseline indoor air testing (for aldehydes, VOCs, and other indoor parameters) and demonstrating that formaldehyde concentrations do not exceed 50 ppbV.

A targeted mass spectral library search is performed to identify odorous VOCs. The search focuses on compounds with low odor thresholds such as terpenes, phenols and higher molecular weight aldehydes and alcohols. Samples are collected on thermal desorption tubes packed with application-specific sorbents. At the laboratory, the samples are thermally desorbed and analyzed by gas chromatography/mass spectrometry. Up to 20 compounds are identified by comparing the spectra with those from the NIST library containing more than 120,000 compounds. Results are reported as tentatively identified compounds (TICs).