Columbia Analytical Services has been actively involved in the analysis of marine and freshwater sediment, water and tissue samples since 1986. Much of our analytical work is in support of dredging, remedial investigation, feasibility studies and risk assessment, which, in many cases, require extremely low-level detection limits. These types of samples present unique challenges to the laboratory due to analytical interferences caused by the matrices. 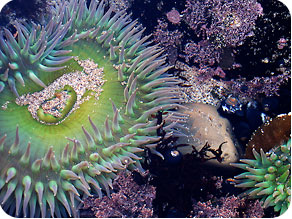 Columbia Analytical Services has developed and implemented cleanup procedures and method modifications to specifically deal with these types of matrices. We have also developed the expertise necessary to perform complex ultra-trace analyses. These low-level analyses of sediment, tissue and water use advanced specialized instrumentation. This instrumentation includes:

The following is a general description of our analytical protocols for determining trace analytes in marine and freshwater environmental samples. Detection limits for these analytes are included in the Marine SOQ. The analytes discussed in this SOQ are those typically requested for marine and freshwater projects. Also included in this SOQ is a section discussing our relevant experience, project references and a project experience matrix.

Pore water extractions are performed according to the latest Army Corps of Engineers (ACOE) interim protocol. Columbia Analytical Services actively attends meetings and provides recommendations for the development of the procedures. Sample manipulations are performed in a glove box under anaerobic conditions. Double centrifuging is performed in a refrigerated centrifuge, maintaining anaerobic conditions within the sample containers. Filtration is optional, depending on project objectives. If required, filtration is performed using a silver membrane or polycarbonate filter media to prevent loss of butyltin compounds to adsorption. The analysis of pore water is performed using the procedures listed in the "Seawater" section of each constituent's analytical protocol.

Pesticide testing and PCB Aroclor analyses are performed by following EPA Methods 8081 and 8082. Prior to instrumental analysis for pesticides, extracts are generally not put through any cleanup process. The PCB Aroclor fraction receives an acid cleanup prior to Gas Chromatograph/Electron Capture Detector (GC/ECD) analysis. For ultra low-level Aroclor analysis a Large Volume Injector (LVI) system is used in conjunction with GC/ECD.

The PCB congener testing is performed by following EPA Method 8082 with slight modifications. The extracts are subjected to acid and permanganate cleanups prior to GC/ECD analysis.

Aqueous samples are analyzed using solvent extraction, derivatization, and a Gas Chromatography Flame Photometric Detector (GC/FPD). Following the addition of surrogate compounds (tripropyltin chloride and tripentyltin chloride), aqueous samples are extracted with hexane that contains 0.2% (wt./vol.) tropolone. Extracts are derivatized with hexylmagnesium bromide in ether via a Grignard reaction. The Grignard reagent is synthesized by Columbia Analytical Services (commercially available reagent is not used due to unacceptable purity). Extracts are cleaned by elution through alumina and silica gel columns. The extracts are analyzed by GC/FPD with a 610 nm filter. A minimum (10%) of analyte hits are confirmed by secondary column GC/FPD or GC/MS analysis. All detectable values are confirmed if the samples originated from an uncharacterized site (i.e., no historical data to suggest the likelihood of the presence of organotin).

Several procedures have been used at Columbia Analytical Services for the analysis of seawater, but the most universal technique with the best overall performance for a relatively wide range of elements is the reductive precipitation technique. This procedure incorporates a chemical separation to remove interfering matrix components so final analysis can be performed using inductively coupled plasma-mass spectroscopy (ICP-MS). The separation utilizes reduction of certain target analytes to the elemental state and precipitation of others as the boride depending on reduction potentials and/or boride solubility. The precipitation is facilitated using elemental palladium and iron boride as carriers. Once separated from the seawater matrix via centrifugation, the precipitate is re-dissolved and analyzed using ICP-MS. Typically, this procedure is performed with the intention of including arsenic and chromium in the analyses. When these elements are not of concern, some improvement of sensitivity can be achieved by altering the dissolution acid used in the procedure. Mercury determinations are generally performed using EPA Method 1631, purge and trap atomic fluorescence.

The polychlorinated dioxins/furans analyses are performed by EPA Methods 8290 and 1613 to meet part per quadrillion detection limits usually specified for this work. In order to reach these ultra-low detection limits, extensive procedures were developed to minimize contamination. These procedures minimize sample transfer and use disposable glassware where feasible.