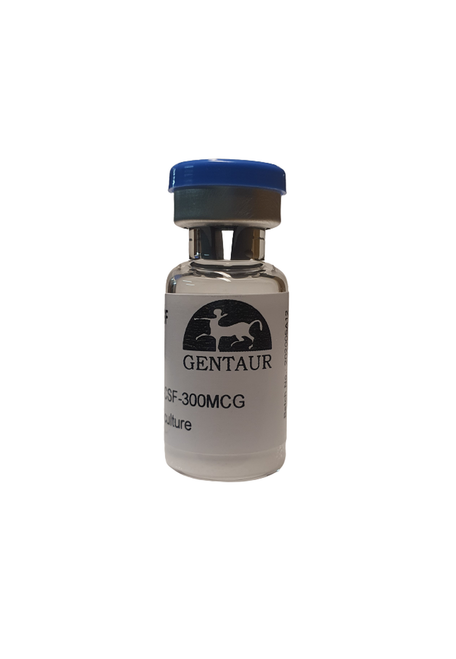 M-CSF (Macrophage colony-stimulating factor, CSF-1) is a survival factor essential for the proliferation and development of monocytes, macrophages, and osteoclast progenitor cells. M-CSF also induces VEGF (vascular endothelial growth factor) secretion by macrophages, thereby mediating mobilization of endothelial progenitor cells and neovascularization. M-CSF is present as several bioactive isoforms that differ in potency and stability. The full-length protein is synthesized as a membrane-spanning protein that can be expressed on the cell surface or further cleaved and modified in the secretory vesicle. Further, M-CSF is a disulfide-bonded homodimer which is processed into one of two isoforms, a glycoprotein or a proteoglycan that has been modified by the addition of chondroitin sulfate to each subunit. Binding of M-CSF to its receptor, c-Fms (CSF-1R or CD115) induces dimerization of the receptor followed by internalization and degradation of the complex. Functionally, M-CSF is known to stimulate differentiation of hematopoietic stem cells to monocyte-macrophage cell populations in culture. M-CSF acts through the CSF receptor 1. Although human M-CSF shows activity on mouse cells, mouse CSF shows no activity on human cells.